The shortboard or ‘Thruster surfboards allows surfers to push the boundaries of the sport. It is the most common board used in competition surfing, sacrificing paddling ease for speed, power and control. The shortboard is usually 5 to 7 feet long and between sixteen and nineteen inches wide. It has an upturned nose which allows it to surf in critical sections of the wave. These types of surfboards are usually seen with a rounded square tail, thinner rails and either three or four fins to allow for quick, radical turns. This is a surfboard designed for the advanced surfer.

Otherwise known as a ‘cruizer’ or ‘log’. The longboard is the most traditional of modern surfboards. They are usually 8 to 12 feet long, at least 2.5 inches thick and twenty inches wide with a rounded nose. This extra volume makes them much more stable in the water making them easier to paddle and catch waves.
Longboards are the best types of longboards for beginners, but there are many people of all ages, shapes, and skill levels. who ride only on longboards. Most long boarders prefer to ride in a more traditional fashion and are content to slide along the wave while walking the length of the board. Placing five or ten toes on the front, or nose, of the board is arguably the greatest thrill of long boarding and is often likened to walking on water.

Malibu or Mini-Mal The malibu board is similar to the longboard in its shape and riding characteristics, but it has a slightly shorter length and slimmer width and tail that allows for sharper turns. Malibu boards are also referred to as a ‘mini-mal’, which is just a slightly shorter malibu. They either have one large fin or three smaller fins.

A funboard is a larger surfboard with a lot of volume, but less than a longboard. They typically range in from 6 feet to 8 feet long and 20 to 22 inches wide. The funboard is a perfect for surfers who want to transition to a smaller board while still maintaining additional paddling power and stability. The funboard can come in a variety of tail shapes, nose shapes, and foils. These types of surfboards are good for beginners boards because they are wide and stable. They are also suitable for heavier surfers and people who generally do not want to put in as much effort to catch waves.

These types of shortboards are typically shorter and wider than the shortboard and because of this they work very well in slower breaking waves. The fishboard has a wider, rounder nose, a wider mid-section, giving it a slightly more rounded shape, and a ‘swallow tail’. They are generally between 5″ and 6 feet long and between 18 and 22 inches wide. They are designed to improve wave catching capability while maintaining speed and manoeuvring performance, ideal for small to medium sized waves. Fish surfboards are usually equipped with two to three fins and are extremely agile in small- to medium-sized surf. 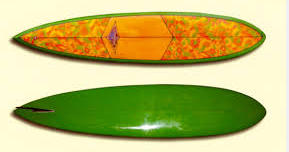 This is the surfboard that you take out when the waves are huge. A typical gun ranges in length from 6 to 10 feet. The extra length, the narrow tail and nose all allow a surfer to gain enough speed while paddling to catch the huge and fast moving waves. It is designed for big drops and handling very high speeds with good control. A gun will most likely have three of four fins. The name derives from the term ‘elephant gun’, and means the board is the surfers’ gun for hunting down big/giant surf.

A hybrid surfboard design mixes a few design elements from different surfboard types. One common example mixes the characteristics and performance of a shortboard with the stability and tail design of a fish. This is a great board for medium size days or a heavier surfer who wants to surf a smaller board.